ORCA has lost a great supporter and friend, world-renowned scientist, and strong promoter of cariology research and training in the USA and worldwide

Dr. George K. Stookey, Professor Emeritus at Indiana University, USA passed away at 86 years of age on January 5, 2022. Throughout his career he was a great friend and strong supporter of the ORCA family. In fact, he organized the second ever ORCA meeting outside of Europe, which was successfully held in Indianapolis, USA in 2005. In 2007 he was recognized for his caries research accomplishments by ORCA with the ORCA-Zsolnay Prize for research in Cariology.

Dr. Stookey was born in 1935 in Indiana, USA. After receiving Bachelor of Science, MSD and PhD degrees from Indiana University (IU), he spent his long and prestigious academic career on the faculty at the IU School of Dentistry. He got his start in the mid-1950s as a young graduate in the lab of Dr. Joseph Muhler, whose research with chemistry professors Harry Day and William Nebergall led to the development of the first successful stannous fluoride formula, which became the caries-preventing active ingredient in Crest toothpaste in the mid 20th century. His successful research career focused on topics such as efficacy of fluoride products, fluoride pharmacology, strategies for calculus prevention, and assessment of technologies for the early detection of dental caries lesions. At IU he established and served for many decades as associate director (1974-1981) and then director (1981-1999) of the Oral Health Research Institute (OHRI), attracting significant amount of funding in support of caries research from national and international sources as well as industry. He also organized the Indiana Conference series of Cariology-related meetings in support of caries research. In addition, he developed one of the most successful cariology training programs in the USA by personally selecting and inviting numerous individuals from all around the world to join his team at the OHRI and train in laboratory and clinical caries research. Attending and participating in ORCA was a must. Many of his students and post-doctoral trainees currently hold prestigious positions around the world continuing to promote his principles of excellence in caries education, training and research.

During his successful academic career he also served as Associate Dean for Research, Acting Dean of the IU School of Dentistry, and Executive Associate Dean, with his successes leading to the recognition of  Distinguished Professor in 1998. After his retirement from IU in 2001, he became president and CEO of Therametric Technologies, Inc. to continue his passion for cariology research. He has left us with nearly 300 publications, conducted almost 400 presentations at scientific meetings, and made contributions to dozens of textbooks. His commitment to dental research earned him numerous awards beyond ORCA, including the International Association for Dental Research (IADR) Distinguished Scientist Award for Dental Caries Research (2002); the IADR E. W. Borrow Memorial Award (2005); the American Dental Association William J. Gies Award (2017) for his innovation in dental education, and the IU Bicentennial Medal (2021).

Personally, for many of us who had the honor and privilege to know him and work with him, Dr. Stookey opened the world of caries research to us, introduced us to ORCA and to important cariologists worldwide, helped support our training, served as mentor and teacher, and an inspiration and role model.

ORCA, the USA, and the world have lost an outstanding researcher, a fantastic mentor and teacher, a true gentleman, and an unconditional supporter and friend. We will deeply miss him. Our hearts are with his family and friends. 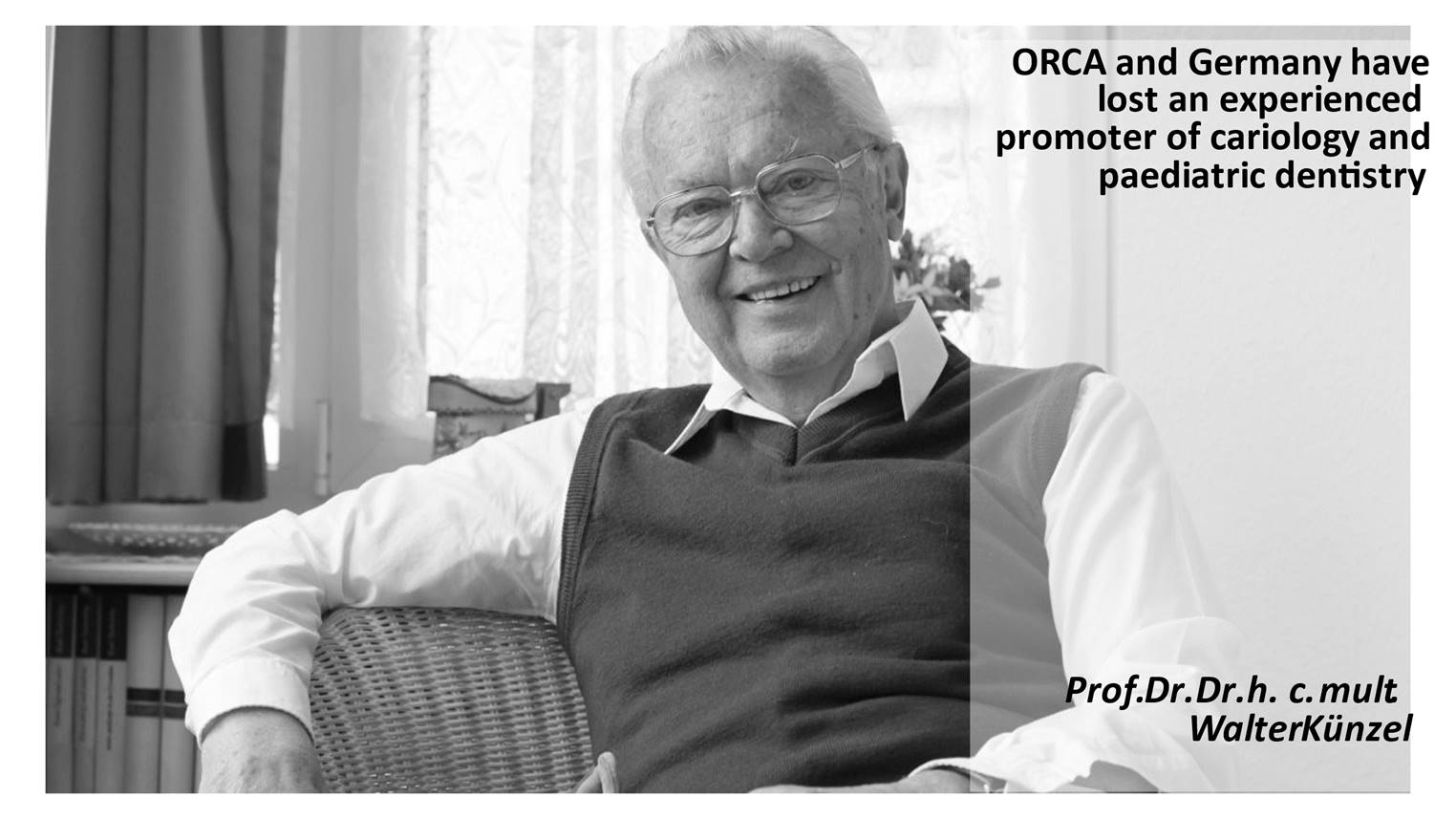 On the 3rd of April 2021 our long-standing member Prof. Dr. Dr. h. c. mult. Walter Künzel passed away at the age of 92 years. Walter Künzel was the founding father of paediatric dentistry, prevention and cariology in Germany and he is one of the few dental professional with an own Wikipedia article (https://de.wikipedia.org/wiki/Walter_Künzel). He was lucky to be only 17 years of age at the end of the World War II which saved him from major political or war activities. Starting a career in a destroyed Europe at the end of the World War II had major difficulties, but also the chance for change; Walter Künzel saw and pursued those opportunities extremely successfully. Being born in Königsgrätz/Bohemia, he had to move into the new German borders which meant studying in East Berlin. After graduation, he stayed at the Humboldt University and – instead of following the tradition of technical dentistry – he started to concentrate on preventive approaches, especially in children. Following the success of water fluoridation in the US and the centralistic approach of a socialist country, he started a series of studies on implementing caries prevention on a population level via water fluoridation starting in Karl-Marx-Stadt/Chemnitz already in 1959 followed by long-term epidemiologic surveys. It was an incredible achievement to initiate a nation-wide preventive programme in post-war East Germany. Together with Thomas Marthaler, Klaus König and many others, he was an ORCA pioneer in the field of caries prevention and systematic international research and standards. Very quickly he finished his “habilitation” in Berlin in 1962, was promoted to a lecturer and he was awarded a full professorship and head of Department for Restorative Dentistry at the University of Leipzig in 1964. His heart was beating for paediatric dentistry, and especially for the promotion of healthy teeth on a national level. He was able to initiate the specialization in paediatric dentistry which led to the foundation of departments for paediatric dentistry at all universities in East Germany. Thus, he was also the founding president of the (East) German Society for Paediatric Dentistry already in 1969, while in the much more affluent West Germany, paediatric dentistry was never a structured specialization, and only a working group within restorative dentistry.

Walter Künzel was also the leading figure to internationalization of the dental sciences in the GDR (German Democratic Republic/socialist East Germany). In spite of working in a heavily controlled, authoritarian socialist country with limited resources, he managed to be a stronghold for ORCA, starting at the advisory board in 1967, with a congress in 1972 in Leipzig and 1981 in Erfurt, be ORCA president in 1980 and 1981 as well as initiating an exchange programme with John Arnold Weatherell/Leed University across the iron curtain. Since 1973 he was an appointed member of a WHO expert group and Director of the Erfurt WHO Collaborative Center "Prevention of Oral Diseases" between 1983 and 1997.

These highly professional endeavours resulted in the first German chair and head of the Department for Preventive Dentistry at the Medical Academie Erfurt (MAE). In spite of the many cooperations with socialistic state officials, his high personal integrity was proven as he remained director of this department even after the democratic revolution in East German and was the first freely elected rector of the whole MAE until 1993. He also embraced German unification and worked actively in establishing the high international standards in cariology, preventive and pediatric dentistry for all Germany. The East German expertise led to the compulsory introduction of paediatric dentistry into the undergraduate curriculum also in West German universities after unification.

Thus, ORCA and Germany have lost an outstanding innovator and facilitator for a professional, international, science- and community-based approach in cariology. Our hearts are with his wife, family and friends.

ORCA has lost one of its pioneers

On 13th of November 2020 our long-standing Swiss member Prof. Dr. Thomas Marthaler passed away at the age of 91 years. From very early on, Tomi Marthaler, as many friends called him, took an international and scientific approach to dentistry, spending the year after his graduation in the USA. Back in Switzerland, he combined working in the family practice with scientific work at the University of Zurich. Like many other pioneers in cariology, he was driven by the question of how to prevent the enormous burden of dental caries in many highly developed countries, instead of treating the damage caries caused. Switzerland was definitely a prime place for this in the 1950s, when ORCA was also founded.

Very systematically, Professor Marthaler found partners in the Swiss School Dental Services, developed a sound epidemiological base and analysed the influence of dietary factors in the process of caries which was not fully understood at that time. The great breakthrough occurred when many researchers concentrated on the caries-preventive effect of fluorides, which was one of the founding topics of ORCA. Thomas Marthaler examined the properties of amine fluorides and played an important role their regular application in Swiss schools. This very simple, but systematic approach led to an incredible caries decline of over 90% and it was an outstanding success for caries research with its epidemiologic, basic science and community dentistry branches. Thus Thomas Marthaler set an example for young researchers and caries prevention in many other countries. Modern caries prevention improved the quality of life of whole populations and countries and Thomas Marthaler helped to make this possible.  ORCA acknowledged these achievements by awarding him the Junior Rolex Prize in 1966. He was part of the international ORCA family presenting their current research at the annual conferences and enriching the evening event with a group of very vocal entertainers.

In Switzerland the outstanding achievements were rewarded with an “Außerordentliche Professur”  meaning an “extraordinary” Professorship for Oral Epidemiology and Preventive Dentistry at the University of Zurich.  In a network with other colleagues such as Hans Mühlemann, Klaus König, who was actually called his preventive twin brother, and Klaus Rateitschak Zurich became one of the leading centres for preventive and biologically-based dentistry, both in cariology and periodontology. They developed the idea and regulations for labelling sweets as “tooth-friendly”, a logo used in many countries. He was also involved in spreading the idea of fluoridated salt as a population-wide preventive approach. Very quickly, his endeavours became a benchmark for other activities in caries prevention, he initiated international comparison for the caries decline published in Caries Research and he also served as adviser to WHO and the American CDC. In appreciation, he became an Honorary Member of ORCA after his retirement.

Thus, ORCA has lost a true member and example for scientific and humanitarian engagement in cariology. Our hearts are with his family and friends.