The Yngve Ericsson Prize is awarded once every three years in acknowledgement of outstanding contributions to prevention of oral diseases.

Established in 1963, The Swedish Patent Revenue Fund for Research in Preventive Odontology was originally founded on royalties from patents, primarily patents for addition of fluoride to dentifrices to prevent or arrest dental caries. The Fund is the largest non-public granting source for dental research in Sweden through its continued support of research into prevention of dental and oral diseases. This international Prize is named is named in honour of its founder and major donator, professor Yngve Ericsson, one of the founders of ORCA. .

The prize awardees are selected by a five-member Prize Committee appointed by the Patent Revenue Fund and ORCA. The Prize is presented at ORCA Congresses every three years.

The deadline for nominations is 01 February 2022.

Nominations are invited for the Yngve Ericsson Prize 2022. The Prize is awarded to persons who have performed outstanding laboratory or clinical research that has contributed specifically to the prevention of dental and oral disease. Candidates are judged on the originality, quality and range of their scientific contributions as well as the range and clinical importance of the results. Individuals who are still active in research are preferred candidates.

Peter Lingström, Professor at the University of Gothenburg, Sweden;
President of the Patent Revenue Fund and Chairman of the Prize Committee.
E-mail: peter.lingstrom@odontologi.gu.se

Marie-Charlotte Huysmans, Professor at the Radboud University Medical Center, Nijmegen, The Netherlands;
President of ORCA and Member of the Prize Committee.
E-mail: Marie-Charlotte.Huysmans@radboudumc.nl

Nobuhiro Takahashi
Professor at the Division of Oral Ecology and Biochemistry at Tohoku University Graduate School of Dentistry in Sendai, Japan. Professor Takahashi has made outstanding contributions within the field of oral microbial physiology, where his research during the years has addressed questions related to the oral biofilm with a particular focus on bacterial metabolism in relation to different oral diseases. He has uncovered the metabolic pathways of a number of oral bacteria and the mechanisms responsible for their biochemical regulation. Professor Takahashi is a pioneer of metabolomics analysis of the oral biofilm. In addition, he has elucidated the interactions between bacterial metabolism-based pathogenicity and environmental factors. Among other achievements can be mentioned that he has been co-author of a number of textbooks and today serve as Associate Editor for Caries Research. Professor Takahashi's scientific contributions have been central to the almost paradigmatic change in oral microbiology taking place during recent years.

Fridus (GA) Van der Weijden
Professor at the Department of Periodontology at the Academic Centre for Dentistry Amsterdam (ACTA), Amsterdam, The Netherlands. Professor Van der Weijden has during his career been actively engaged in research related to the prevention and therapy of gingivitis, periodontitis, peri-implant diseases and caries. His research interest focuses particularly on oral hygiene, where toothbrushes, dentifrices and mouth rinses are at the core of the research portfolio. Dr Van der Weijden’s original research has to a large part been performed in the form of randomized controlled trials, focusing on the effects of various oral hygiene-related products. Since 2002 Professor Van der Weijden has, in addition, performed extensive and innovative work resulting in a large number of high quality systematic reviews of importance for the field of preventive odontology.

The Prize to Dr Takahashi was presented at the ORCA Congress in Cartagena, Colombia in July 2019, and Dr Van der Weijden will be awarded in Cagliari, Italy in July 2020. 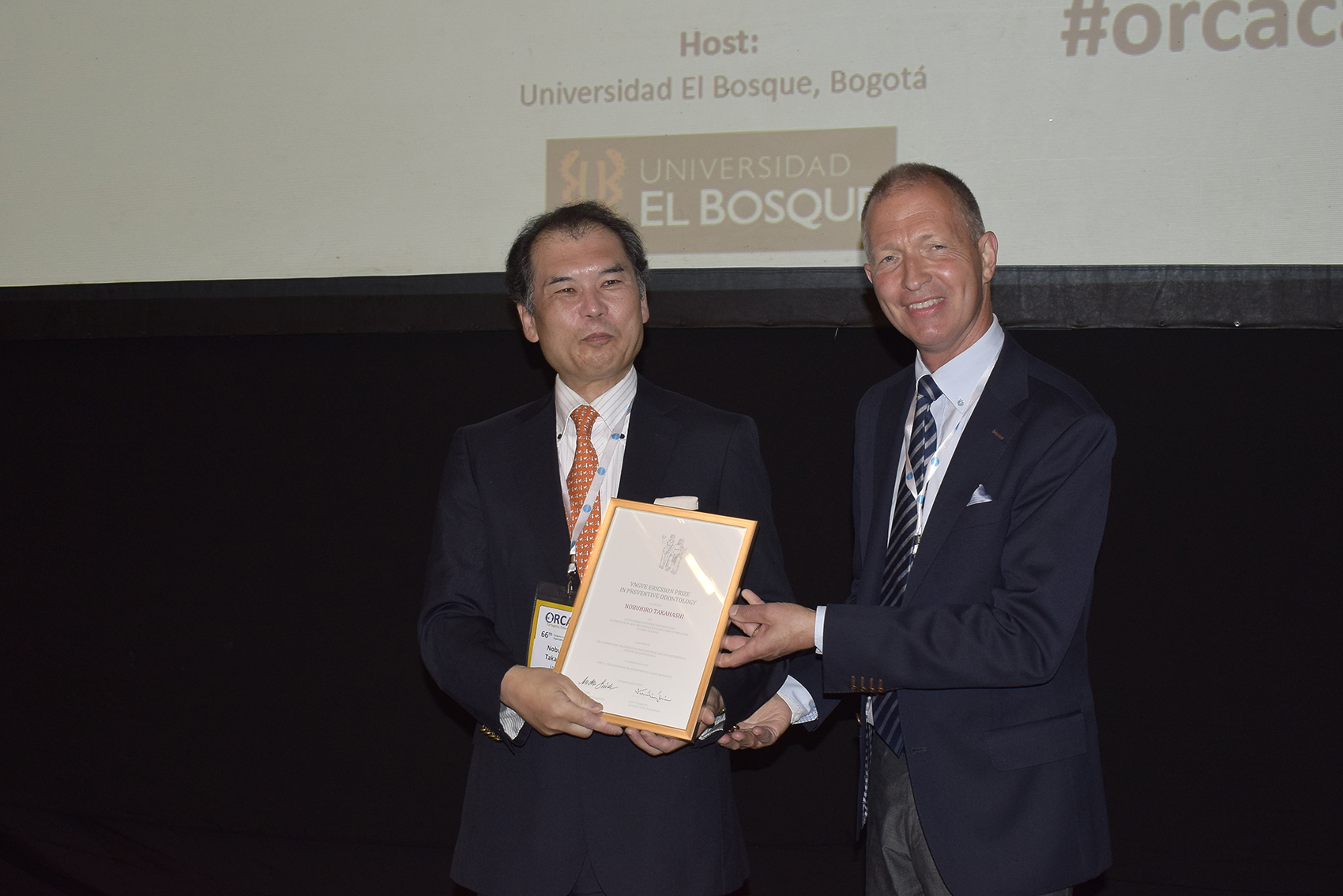 The following researchers have received the Yngve Ericsson Prize:

Past awardees at Orca Congresses: